A new coronavirus that has spread to more than 2,000 people is infectious in its incubation period – before symptoms show – making it harder to contain, Chinese officials say.

Fifty-six people have died from the virus. Health minister Ma Xiaowei told reporters the ability of the virus to spread appeared to be strengthening.

“There’s pretty much nobody on the street here” Inside Hubei province, where the deadly coronavirus outbreak originated

Wuhan in Hubei, the source of the outbreak, is in effective lockdown.

The infections were at a “crucial stage of containment”, Ma Xiaowei said.

Officials announced that the sale of all wildlife in China would be banned from Sunday. The virus is thought to have originated in animals, but no cause has been officially identified.

In humans, the incubation period – during which a person has the disease, but no symptoms yet – ranges from between one and 14 days, officials believe.

Without symptoms, a person may not know they have the infection, but still be able to spread it.

This is a significant development in our understanding of the virus and the lengths China will have to go to, to stop it.

People with Sars (the last deadly coronavirus outbreak to hit China) and Ebola are contagious only when symptoms appear.

Such outbreaks are relatively easy to stop – identify and isolate people who are sick and monitor anyone they came into contact with.

Flu, however, is the most famous example of a virus that you spread before you even know you’re ill.

We are not at the stage where people are saying this could be a global pandemic like swine flu.

But stopping such “symptomless spreaders” will make the job of the Chinese authorities much harder.

There are still crucial questions – how infectious are people during the incubation period, and did any of the patients outside China spread the disease in those countries before becoming sick?

And why did China’s National Health Commission say the transmission ability of this virus is getting stronger?

What’s it like in Wuhan?
The mayor of the city, Zhou Xianwang, has said he expects 1,000 new patients there. Wuhan has seen queues forming at hospitals as people seek treatment.

But Mr Zhou said an increase in private donations had helped reduce shortages of some medical equipment.

Sophie, from the UK, is inside the locked-down city. She told the BBC: “We’ve been stuck in the house four days. We found out about the virus on 31 December. It’s just got worse and worse. Now it’s really bad.” 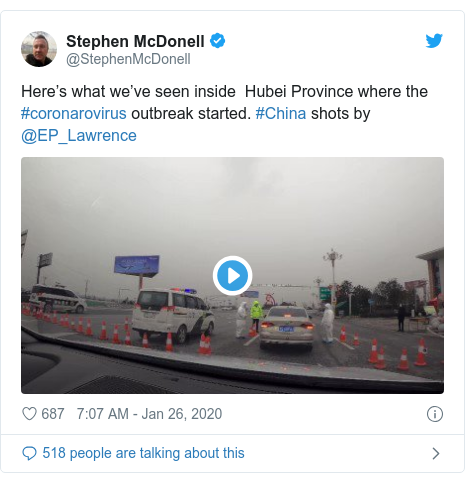 With no taxis on the streets, volunteer drivers are bringing people to the crowded hospitals.

“There are no cars, so we are responsible for bringing people there (to hospital), and we take them back, afterwards we will do disinfecting. All for free,” Yin Yu told AFP news agency.

“We’re fine,” another driver, Zhang Lin, said. “There has to be someone who does this. We’re from Wuhan, and even you guys [journalists] are here to help us, our own citizens should also come out to do this. This is our job.”

What is the virus?
The virus itself is a new, or “novel” coronavirus – a family that normally affects animals.

One human variant causes the common cold, but another, Sars, killed hundreds in a major outbreak in 2003.

Symptoms seem to start with a fever, followed by a dry cough and then, after a week, lead to shortness of breath and some patients needing hospital treatment.

There is no specific cure or vaccine.

At the end of Saturday in China, there were 1975 cases and a further 2,684 suspected cases, China’s National Health Commission said.

How has it spread?

The rapid spread of the disease coincides with the Lunar New Year festival, one of the busiest travel periods in the Chinese calendar.

From Wuhan, a city of 11 million people, the disease spread to neighbouring cities and provinces in smaller numbers. By Saturday, cases were reported across China.

But the disease also spread by air travel, and several countries are dealing with a handful of cases. 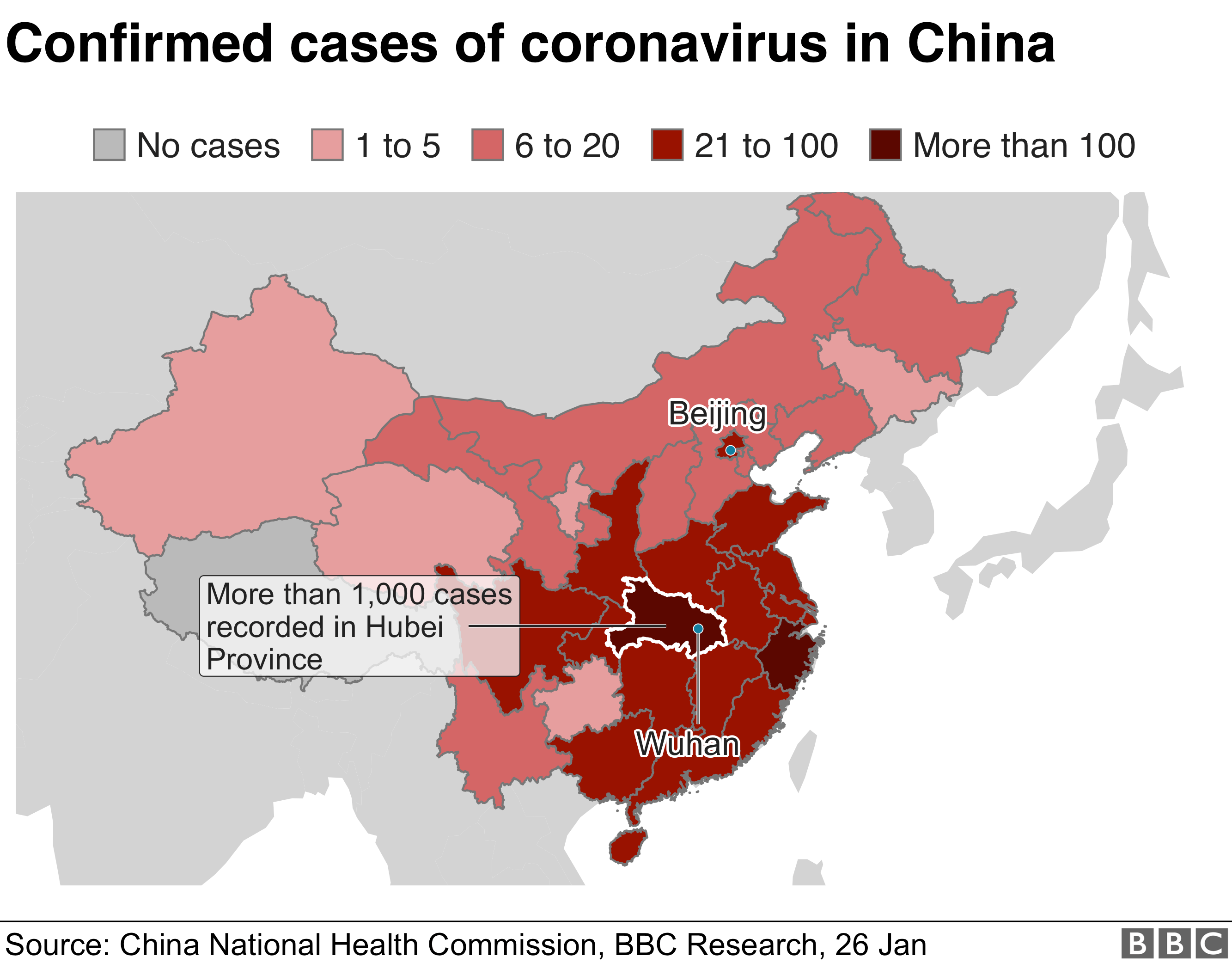 A small number of infections have been reported in neighbouring Asian nations, but also further afield.

Cases have been confirmed in Japan, Taiwan, Nepal, Thailand, Vietnam, Singapore, Australia, the US, and France.

Other countries have carried out tests on suspected cases – for example, the UK tested 31 people, but all results came back negative.

The US is extracting its consular staff in Wuhan, while Japan and the UK have both said they are considering evacuating citizens. 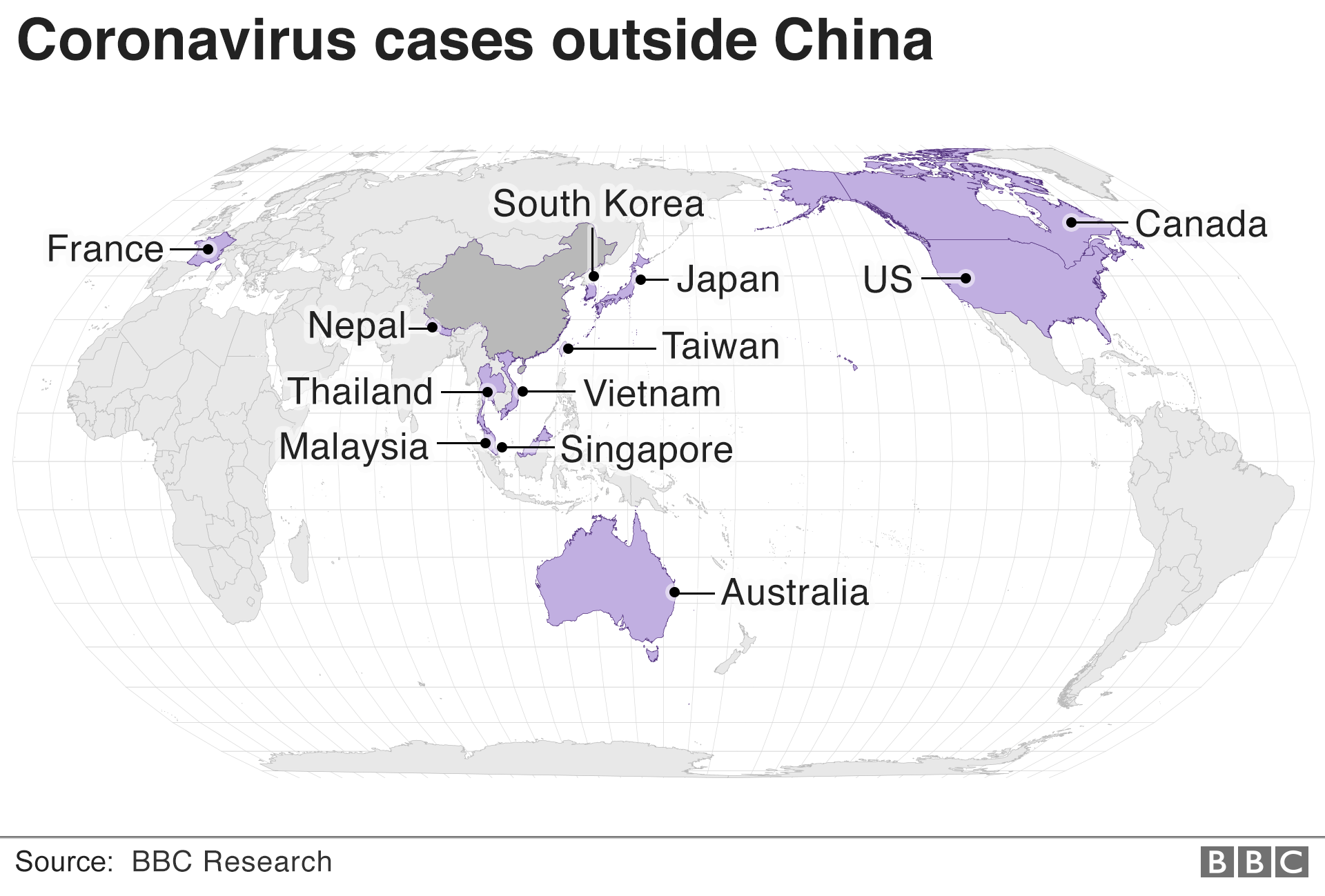