Last thing about #nCov2019 tonight. In response to a few questions there seems to be a bit of confusion on an issue that, as a dude who works on public health ethics, I take really seriously: the role of uncertainty in a situation like this one. [Thread]

Public health authorities, in China and elsewhere, are operating under extreme conditions of uncertainty. They are having to make decisions based on that, and sometimes their decisions are going to bad ones.

I tend to think acts under uncertainty are quite ethically complicated, and how we treat uncertainty (and its distribution) is really fraught. But what I think most people can admit is that we shouldn’t act as if the worst possible outcome is the one that WILL happen.

So it matters when folks like Ding (see below) tell you things *are* a certain way. Because if we believe the catastrophic rhetoric—two, three full days of it?!—the pressure to act becomes unbearable for governments. That can lead to really bad actions.

Dude didn’t own his last panic-mongering, now “fact checking” the Canadians based on a single case of questionable authenticity. There’s NO authoritative evidence of asymptomatic transmission of #ncov2019. There is, however, strong evidence of a grift on @CBCNews 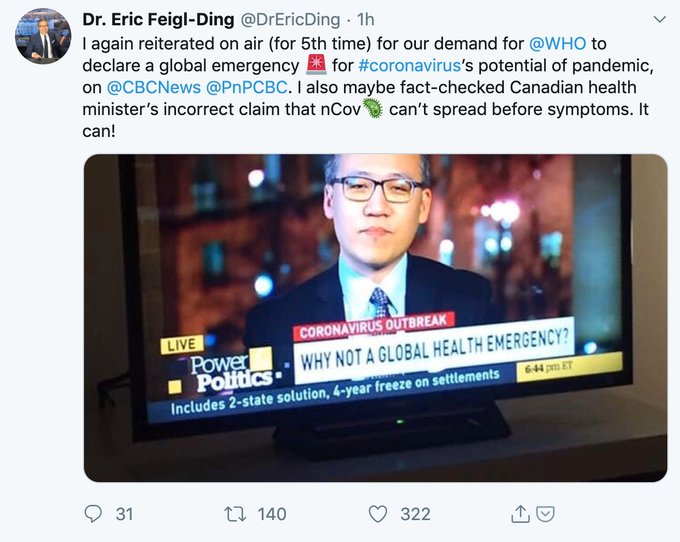 This is already happening – Australia’s actions are absolutely disproportionate to the threat of #nCoV2019, as we understand it, given its uncertainties.

Australia is already at “treat folks in a city of 11 million people as “exposed”, and lock them on an island.” What happens if #nCoV2019 becomes more serious? Public health crises become human rights catastrophes at the drop of a hat.

That’s why it is important to be careful in our analysis, and how we communicate: because circumstance and political expedience pull us in the other direction. We need to act in this environment of uncertainty, but we need to act ways that are flexible to changes in information.

It matters if cases are asymptomatic prior to clinical disease; or asymptomatic Infection with the possibility of transmission; or sub-clinical but shedding. These, and their incidence among all cases, may require different responses. But they are each differently uncertain.

We gain nothing from rushing, thanks to folks like Ding, to conclusions that are ungrounded. We gain a fair bit on acting early, but in a way that reflects uncertainty. Occasionally we will want to be precautionary. But not every time, and not disproportionately.

Because it really matter for this outbreak, and the next, what kind of response we take. And I have a genuine, but I think well-founded fear, that this kind of response is going to be really harmful to a lot of very vulnerable people if we aren’t careful. /fin

Define “authoritative” in “no authoritative evidence of asymptomatic transmission”. The Bavarian cases alone would lead any reasonable person to the fact that this is happening. Also, that Bavarian Shanghai spreader was visited by asymptomatic parents from Wuhan.

I suggest you keep your eye on the ball – the mounting evidence is asymptomatic transmission of 2019-nCoV which has the potential to turn this epidemic into a pandemic, rather than your unprofessional comments about other intelligent people’s reasonable concerns.

Good thread. Thanks. We see a similar dynamic in wildland fire and it holds, I assume, on other incidents. Uncertainty is tough to deal with and harder to explain, particularly when you are the “expert” and a community is looking to you to make things normal again.

You can’t be wishy-washy and since everyone knows it is a tough a situation, false confidence is the worst. I think you have to be certain in your uncertainty. That is, explain what needs to be known or needs to happen before an action can be taken or a decision made.

All that is built on a foundation of faith in your tested processes, including info sharing & decision making, as well as a commitment to be honest & trust the public with your dilemmas. It’s tough to do when you land in a small town. More so at the national/international level.