Welcome to my daily behind-the-scenes thread on the impeachment trial.

1/ I have a vague recollection that my day started w a meeting w the Amtrak CEO (my work on other stuff doesn’t stop) but my memory is hazy after 8 hours and 100 questions.

2/ It’s now day 8 and habits are loosening up in the Senate chamber. More side conversations, more milling about. I even heard about some Senators sneaking some pleasure reading onto their desks.

3/ Dershowitz is clearly made for TV, and I guess that’s why Trump insists that he get so much time. But every time he gets up he makes a new crazy argument. Today: anything the President does to get re-elected is by definition unimpeachable. Yikes.

4/ I have a list of like 5 questions I want to ask. I’ve given them to Schumer and his team so they can group the questions in some logical order. But halfway through the day Schiff says something that changes my mind.

5/ Schiff says that the House managers will commit to not appealing any rulings by Roberts on witnesses and documents. This would be a way to quicken testimony. So I decide to ask the President’s team if they would commit to the same.

6/ I scribble down my question as legibly as I can and hand it Schumer’s staff. They agree that it’s a good question and they send it to get typed up. I wonder if my staff will be sore that we worked for hours on questions and now I wrote a new one in 5 seconds. Improvisation! 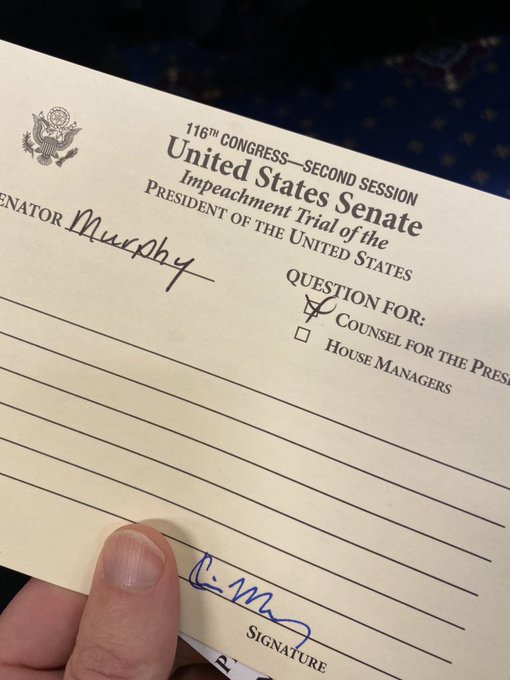 7/ Right before the final break, the Presidents team makes another novel argument: that there’s nothing wrong with getting political dirt on your election opponents from a foreign nation. I wonder whether the late hour is causing his folks to get sloppy.

8/ With 15 minutes to go I finally get to ask my question. Sekukow smacks it down, reserving the right to contest Bolton and other witnesses in court for months. This is their game – threaten the Senate with endless delays if we dare try to seek the truth. 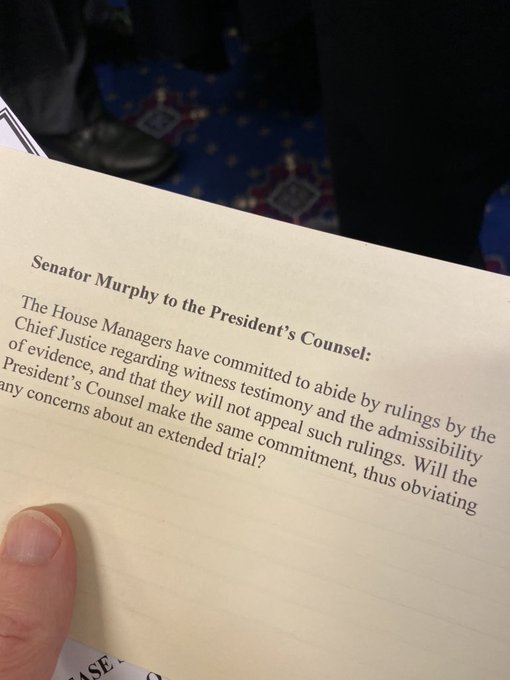 9/ The trial ends at 11. I run over and do a quick appearance on @11thHour on @MSNBC , and head back to the office. I run into @SenJohnThune in the elevator. “John, I never knew you could get so tired from just sitting on your ass 10 hours.”